Not only are pumpkins rich in vitamin A, they highly boost your immunity. If you want to protect yourself from chronic diseases, pumpkins are a good way to start. What about keeping weight loss? Pumpkins will do exactly that for you because they have a low-calorie count and lots of nutrients.

Let’s be honest, pumpkins don’t exactly have the best taste. That is why a whipping up a vegan pumpkin dessert makes the experience a lot more mouthwatering.

Like the name suggests, no baking is required for this simple dessert. All you need is a good blender. This low fat vegan pumpkin dessert is perfect for the fall season.

This pie is free of dairy, gluten and refined sugar. It is super easy to make and focuses more on the flavor. Did I mention it’s paleo friendly?

· Transfer mixture on top of the uncooked crust and spread evenly

· Allow to chill in the fridge for 4 hours to overnight

· Garnish with whip cream and serve

This easy pumpkin dessert only takes 30 minutes to prepare. The pumpkin maintains the moist in the cupcakes making them a delicious treat. This recipe is egg and dairy free. 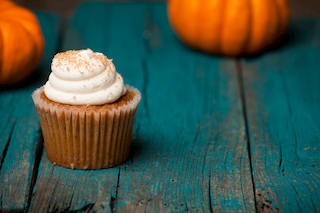 · In another bowl, mix the pumpkin puree, almond and vinegar mixture, canola oil, vanilla. Mix with the dry ingredients. Pour the mixture into the cups and bake for 16-20minutes

· Remove from oven and allow to cool completely

This delicious vegan chocolate pumpkin dessert is substitute’s tofu with eggs. This is meant to create a silky smooth dessert. Silken tofu easily blends with any dessert making it perfect for this dessert. This vegan pumpkin dessert also has a toasted oatmeal crust for texture.

Preparation։ · Preheat your oven to 350°F.

· Grind the oats and pour into a 9-inch pie pan

· Pour the vegan chocolate pumpkin pie filling into the pan

· Bake for 1 hour, remove, allow to cool and serve

This vegan pumpkin dessert is gluten free and paleo friendly. Made with plant-based protein, it is definitely a must try.

The preparation is simple. Combine all the ingredients in a bowl and form equal sized balls. Freeze for about 10 minutes. Remove and coat the balls in chocolate and coconut oil. Freeze once more and serve.

A delightful vegan pumpkin frozen dessert that is perfectly textured. This dessert is packed with flavor and garnished with pecan nuts.

The best way to achieve maximum flavor with this dessert is to use full fat ingredients and heat with syrup to get a smooth consistency. Once it simmers, blend the mixture and add in salt and pumpkin spice to get a burst of flavor.

Once chilled, churn the mixture in an ice cream maker and freeze.

This is a great fall dessert because it’s delicious and easy to make. The light crisp texture of this gluten free dessert makes it a wonderful treat.

To make this you will mix the pumpkin puree, vegan butter, sugar and dry ingredients. Once the dough is made, chill it in the fridge. Roll the dough and cut out into desired shapes and sizes. Bake in the preheated oven at 350 degrees for 10-20 minutes, allow to cool and dust with cinnamon. Allow to cool and serve.

A highly moist and slightly sweetened treat you will definitely enjoy. This vegan pumpkin dessert is gluten free and paleo based. Only takes 30 minutes to make makinf it fast and easy.

· Spray the cooking dish with oil and set aside

· In a bowl stir the almond butter, pumpkin, banana, maple syrup, and vanilla

· Add the other ingredients until well combined

· Transfer to the baking dish. Smoothen with a spoon< · Bake for 30 minutes. · Allow to cool and serve 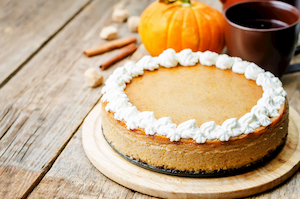 Yet another perfect gluten-free dessert for the fall alone or with some coffee. This easy pumpkin dessert only needs a spoon and one large bowl. It tastes like cinnamon and topped with vegan cashew nuts for flavor and texture.

· Insert a toothpick into the center until it comes out clean

· Remove from the oven and let the cake cool completely

These mouth-watering treats have a deep orange interior. On the top is a delicious chocolate crust. Because its gluten and dairy free, it’s not only healthy but flavorful as well.

For the Raw Chocolate Pie Crust you will need:

For the Chocolate Shell you will need:

For the Pumpkin Filling you will need:

· Blend the chocolate crust ingredients in a food processor

· Pour a tablespoon each of the crust into the muffin cups

· Mix all the pumpkin filling ingredients in a bowl. Freeze for 10minutes

· Pour the ½ tablespoon pumpkin filling into each muffin cup

· Freeze for 30minutes to 1 hour and serve

These super soft and moist pumpkin cookies use a homemade pumpkin puree and gluten-free flour.

· Portion the dough, 1 tablespoon per cookie to the baking tray

· Remove from oven and allow to cool for 2 minutes

· Transfer to a wire rack to cool completely and serve